hi, first post from a 2 stroke lover from sunny derbyshire.
this is the sprint bike as i found her. i kept the engine and sold the rest to a bloke at fahron engineering, called ron. his plan was to rebuild it as a sprint bike. my plan is to rebuild the engine. unfortunately the gearbox looks like it's been attacked by metal moths. everything that could be drilled has been. there's no speedo drive in it or kickstart shaft, alternator rotor and stator etc. add the fact that the left main bearing housing was in 3 pieces and you can see what i'm up against. i've been building 2 strokes for many years, all japanese. i've never completely rebuilt a british 2 stroke - ever. i'll post a photo of the pistons and what the previous owner did to them. the crank has been padded out with aluminium on the inside of the cranks and plugged on the outside of them. hope that covers everything 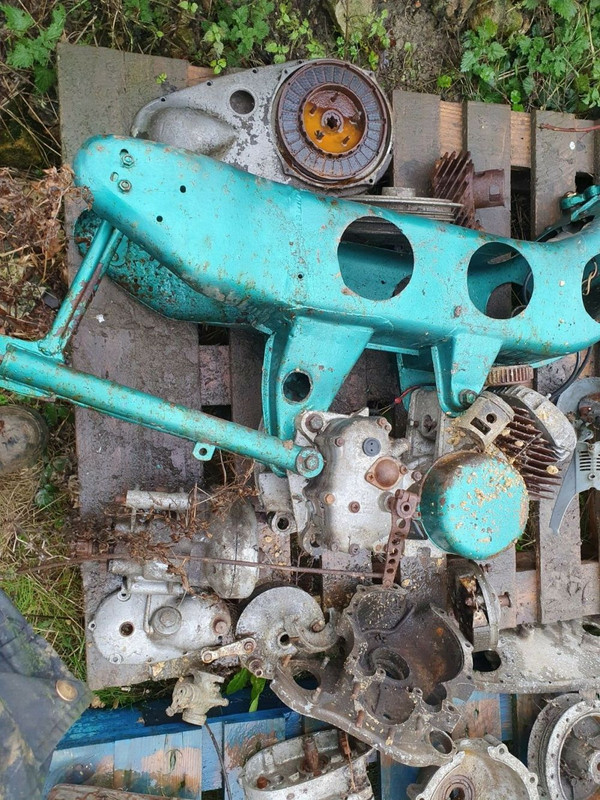 why do this to brand new pistons? 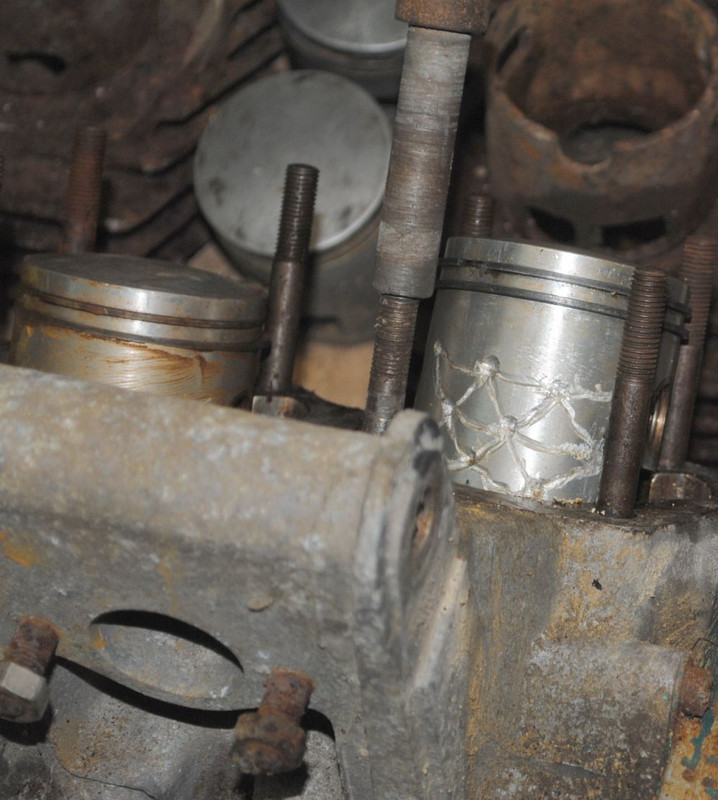 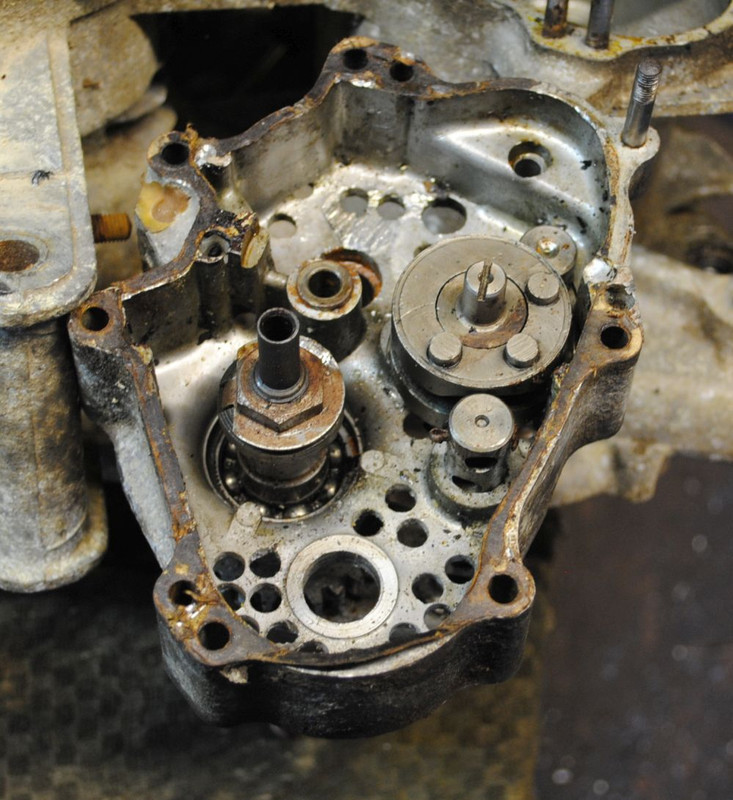 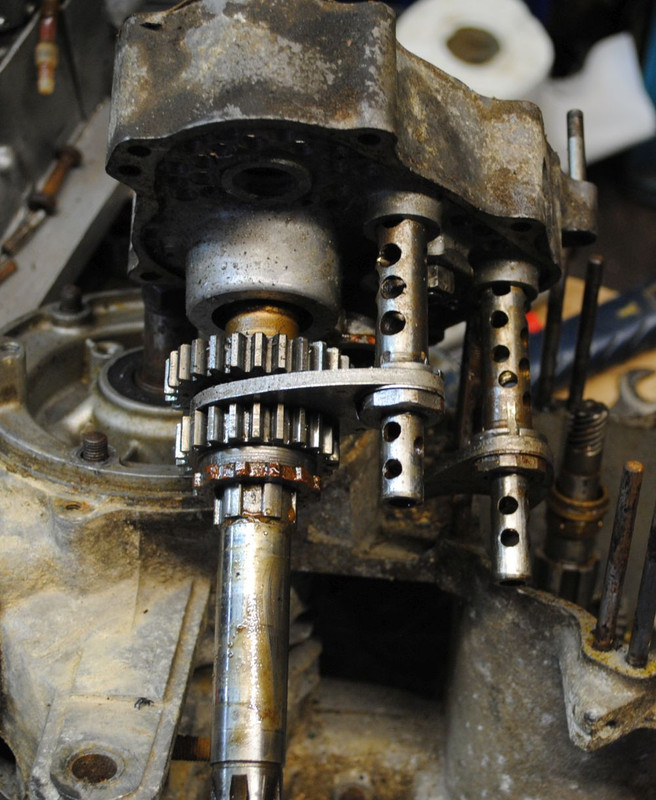 Hi, mite be worth posting this in the 2 Stroke section below may get a better feedback.

Frank , also from not so sunny Derbyshire at the mo.
Top

john.bebb
Holder of a Nylon Anorak

intriguing hand machined lattice work on the RH piston... any ideas as to wtf the owner was trying to achieve???
Top

Bob.Murphy
Holder of a Silver Anorak

I'm guessing that the old RH piston seized and the owner was trying to create oil-retaining grooves in the new one.

Those are large grooves for a two-stroke (not much oil about in there, you just need a film) !

john.bebb
Holder of a Nylon Anorak

well - I hope he also did the LH pot to keep them balanced....
Top

Marginal gains, did it belong to Dave Brailsford? I think he came from Derbyshire.
Best of luck,
Ben
Top

hi Ade ;
you have quite a few 4 stroke parts shown in your top photo , along with a burman gearbox i think .

looks like your engine has a 1 1/16" inlet opening in the crankcase already , to take a 376 carb or something suitable .

take a look at the article in the old motorcycle mechanics magazine from the 1960s about "100mph ariel arrow" , it will give you an idea of many of the tuning mods implemented in the engine or what you can do to another engine if you wanted .

i have a "racer" which was done in the early 1970s and it has been modified as per those featured articles , using a 626 carb and expansion chambers made from the design that was published at the time .

if the expansion chamber design is not in the "2 stroke developments "book by john ellis then you could possibly get him to scan or copy it for you so you can get the dimensions etc for cutting the sheet prior to rolling and welding .
i welded mine up but the bits were already rolled at the time i got the bike back in the late 1980s .

i think there are some files uploaded on the ariel arrow and leader page on facebook but not sure if the tuning mods articles are on there .

if you join the national sprint association and have an ACU licence they do have a few pre december 31st 1960 vintage bikes that turn up at meetings , weston zoyland is a very good venue to enter an old bike in and get a few runs down the old airstrip if you are down south , but if you are up north then there is a lot more going on and more venues run either by the NSA or straighliners [trevor duckworth mr 2 stroke] .

maybe speak to Andy Eames if you get into springing or hill climbing as i think he does a fair bit of it in your neck of woods , find him on the facebook arrow leader page .

also if you intend doing any parade "racing" speak to Roger James [jess] a he does a lot of that and also has vast knowledge of all things arrow and leader and their history plus much knowledge about the racing side of them . ..

hope you get something built up and running soon .
cheers
ian
Top
Post Reply
7 posts • Page 1 of 1

Return to “A Bad thing happened to my Ariel”

Users browsing this forum: No registered users and 2 guests